How to create Dubstep sounds in Fruity Loops

I work with Fruity Loops Producer. For creating Dubstep sounds I use two plugins. "Glitch" is a free plugin I downloaded, "Fruity Squeeze" is included in Fruity Loops.

"Glitch" is a realtime audio manipulation system which allows you to alter your music in a variety of ways ranging from quite subtle to extremely bizarre. It was originally created to help speed up the production of glitchy electronic beats, though it is really versatile enough to be applied to a wide range of musical styles. At its heart is a tempo-synched step sequencer which determines the selection of effects that are applied to your music. Effects can be either sequenced manually for full control over the outcome, selected at random for exciting and unexpected results, or a mixture of both. (source: user manual) 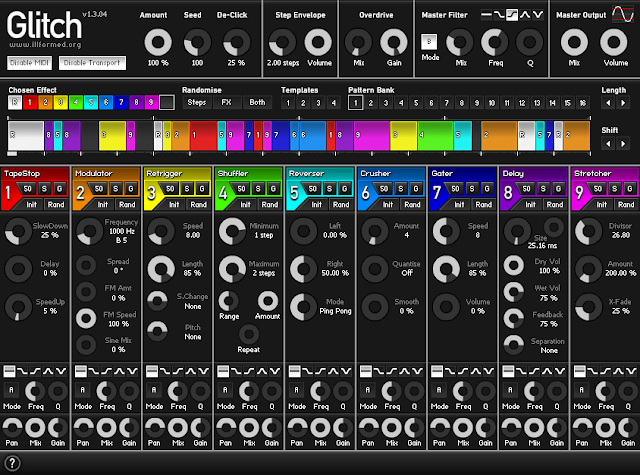 I first choose one effect with "Solo Toggle"-button and "Mix" to 100%.
Then I set the parameters while I play the bar in Fruity Loops.
"Global Toggle" means that the selected effect is applied to the signal after the other sequenced effects. So I can play two effects simultaneously. Easy Example: Select the Gater effect in the sequencer and select the Delay effect as global effect. I seldom use that because a combination of two effects can result in audio chaos.

I always set effects black (no effect) to a step. I never use the random function "R", because results are unpredictable. To start off with the sequencer I sometimes push the button "Both" of the randomize function to get a quick start. I usually do not use the filter sections. I process the signal in Fruity Loops Mixer.

Fruity Loops Online Manual
http://www.image-line.com/support/FLHelp/
Posted by ViennaCC at 10:59 AM No comments:

You never know what you have until you loose it - or clean up your room.

I want to do a song combining pop with dubstep. Is that possible?

Music: I like house - also outdoors.
Posted by ViennaCC at 11:59 PM No comments:

#Guitar: The most badass guitar solo of all time (umpf, i think i better sell my guitars)
#Guitar: Jazz Improvisation: Licks as a Learning Tool

This year every week there is a "Friday, the 13th".

Get rid of the things that drag you down. Not all, some of them are worth to repair.

Sometimes I want to express the inexpressible. But how to say that?
Posted by ViennaCC at 11:30 PM No comments:

#Writing:
The Most Overused Words of 2012 (a kind of review)

When I use the word 'like' I always think of a button to press. Just like now…

If you think one minute is a short time then you have never been in a treadmill.

There are song lyrics that are so dirty that you taste mud when singing it.

Big fortune is not running after you, you got to find it.
Posted by ViennaCC at 11:30 PM No comments:

#Guitar: The Language of Improvisation - Video Guitar Lessons
#Guitar: Double Guitar: A Six String Guitar, A Bass Guitar, One Neck
#Guitar: How To Buy A Guitar (how? Simply go to the shop with cash in your pants)

WoW (#WordsOfWisdom the world is waiting for ;-)

A good songidea is not enough, it's a bunch of work to make a good recording.

Who needs garden Eden if there is music in the air?

And now: let's start a new year with a lot of New Year's resolutions that will be broken sooner as you expect.
Posted by ViennaCC at 11:30 PM No comments:

#SocialMedia:
3 Reasons You Should Quit Social Media In 2013 - Forbes (dig this!)
#SocialMedia:
12 Principles for Responding to Negative Online Comments (i never deleted negative comments - it's an opinion)

50% of knowledge you get at school you will never need. This 50% is only 20% knowledge you need for life. The problem is, you find out much later what 50% you don't need and what the missing 80% are.

Some hot music is so cool, so cool, man.
Posted by ViennaCC at 11:30 PM No comments: