While I was at ASCAP EXPO in LOEWS Hotel there was a bomb alarm in the next house near Dolby Theatre (former Kodak Theatre). Police blocked the Hollywood Bvd. Helicopteres were standing in the air. I don't think that it was police. I think it were reporters waiting for the bang to get the shot.
Finally it turned out to be a joke.
http://www.huffingtonpost.com/2013/04/18/hooters-bomb-threat_n_3113613.html 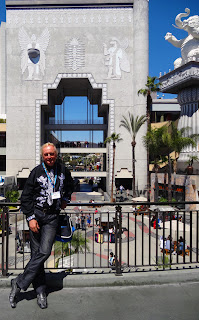 Posted by ViennaCC at 4:07 PM No comments:

Email ThisBlogThis!Share to TwitterShare to FacebookShare to Pinterest
Labels: hollywood

#Guitar: The World of Guitar According to Paul McCartney
#Guitar: What are Chord Inversions? (playing with head stand?)
#Guitar: Fingerpicking Patterns (Part 3)
#Guitar: Guitarists to the fore in today’s rare remixes