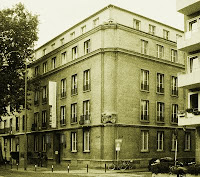 In El-De house documents from the dark history of Nazi time can be viewed. In Nazi times it was a Gestapo house. People were prisoned, tortured and killed.
There are pictures, documents, videos and in the basement the cells for prisoned people can be viewed. Cells were built for 2 people, but Nazis sometimes put 20 people in one cell. In the second basement it was a air raid shelter. But Nazis tortured prisoners there, for screamings did not come to street.
Read the stories, see the paintings on the wall. See pictures of politicians and resistance people. Read about the fascinating story of Russian prisoner Askold Kurow and his escape. They never got him, he died in 1974.
Posted by ViennaCC at 10:50 PM No comments: