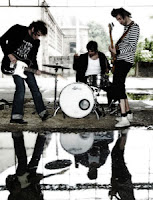 Frame is a great Austrian band from Salzburg, the city Mozart started his career.

The sound is rock perfectly produced. Very pure, let's say minimized. 3 men playing, a rockformation with guitar, bass and drums. The music is straight played indierock, no synthie-soundeffects, no omateness. The throaty voice fits well. And the guitarsolo - ok, in the studiorecording they added a sologuitar - is played with soul, a soul being hammered by the rhythm-section, a soul crying out what the world moves.

And when you hear "We are living in an empire of greed" you may be tempted to click on the "buy" button. Well, rock'n'roll is commercial. I would not see Frame standing in one line with bank managers or other bogeymen. And in the musicvideo to "Empire of greed" they burn cash. Real burning with flames.

Can be new heroes of Austrorock!

Unfortunately the bandwebsite is optimized for any browser, not for MS-IE. Is this a protest against a greedy multinational company?
Posted by ViennaCC at 9:24 AM No comments:

Email ThisBlogThis!Share to TwitterShare to FacebookShare to Pinterest
Labels: frame

Guiness beer - give it a try 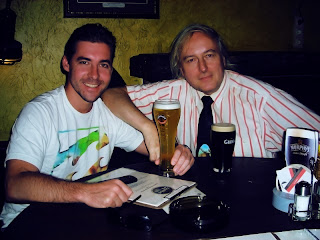 Drinking Guiness with Reinhard leaving Vienna to Golan / Syria/Libanon/Israel. Never before tasted Guiness, but at Charlie P's Irish Pub I tried it.
Tastes good and so different to our beer, pale ale / Lager.
Wait staff only speaks english, but obviously understand german. Real irish men? I don't think so, more look spanish, but that's ok too. Loud music, rock/pop/indie. Not too small, they even have a room downstairs. Well, to beer I must say, well served, only little foam. That's a thumbs up.

Check out my tie originally from Sweden showing an elk. WOOOUUUUUUUHHHHH!
Posted by ViennaCC at 11:26 PM No comments:

Went to Stadtfest, visited all stages. At Hof, my god, a wrecked off rock'n'roller band played worse than a school band practicing. How many humpty dumpty boogie-piano solos does the world need?
At Heldenplatz Christina Stürmer played. Nice songs, nice sound. I like her. Not the big deal, but the music is ok.
Beer, wine, Bratwurst and icecream. Doctor may say "no, no, no"; I say "yes, yes, yes".
Posted by ViennaCC at 10:30 PM No comments:

Email ThisBlogThis!Share to TwitterShare to FacebookShare to Pinterest
Labels: vienna


Producer don't like that, because results are unpredictable and they have no time (and energy) for experiments. Nevertheless let creativity flow. Variations of a theme are interesting.

Finally we made a signation and a trailer. I fixed the camera on the speaker and my job was to zoom in slowly. First shots I tried to get a feeling on the cam. Don't hesitate to try out zooms and moves. And if we need 20 shots. And if we have screaming matches (surprisingly didn't have this time). And if you are powered out. Always remember: The couch potatoe watching TV does not care about. Only the result counts.﻿﻿
﻿﻿
Posted by ViennaCC at 9:07 PM No comments: 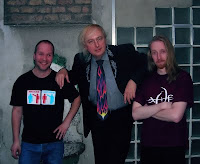 Videoshot with band "Schrenz" in Vienna. Talking about album and band history. And I made a video of one song in the practice room. Very good room there with acoustic insulation. 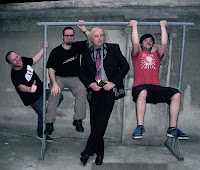 Schrenz is playing rockmusic with german lyrics. Sure, we made photoshots in the backyard. Start: 7pm, end 10h30pm. And I played a little guitar. Just tried the guitarist's Gibson. Now cutting the material. 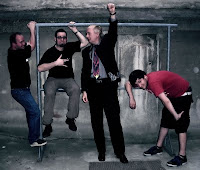 Always turn on supertrooper to make a light scene. I never shoot the final moody movie. Because I can work over the clean material and add effects like turn the scene darker and more blue (as I did with the photos). If I shoot dark and blue coloured and later want it more warm (red colour tone) and lighter, it is impossible. Then I can only trash the material and start anew. So, always start clear and clean and add effects later.

Email ThisBlogThis!Share to TwitterShare to FacebookShare to Pinterest
Labels: schrenz

Calibrex's music is a typical example of nice homemusician just trying his keyboard.
Song fm4_1: Starts up with a cold, heartless bassline without groove. The whole song is a collection of unlovingly tapped notes on a keyboard. Also awful the trumpet solo. There is a lack of arrangement and sound.
Well, that's how we all probably begun.
Why mention this?

Arnulf Rainer, (famous) Austrian painter, once replied to an interviewer's question what he teaches students: "I show my way and instruct students not to go this way. It is an experience to get a wrong way shown and to know where not to go."
I say: Analyze why Calibrex's music is awful and learn not to make the same mistakes.
Posted by ViennaCC at 3:40 PM No comments: 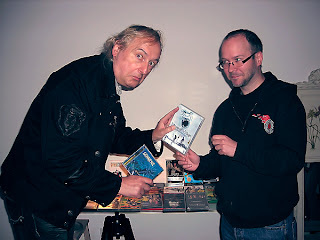 Fleamarket at photostudio Sophie Tiller. I purchased a DVD-box AVATAR. With Thomas Eisenmenger, member of band "Schrenz" I discussed a TV-interview and musicvideo I plan to produce.
He made pictures too, but unfortunately deleted the pictures. Finally he handled me the latest CD by Schrenz called HIRNPAUSE (on the photo i have it in my right hand) for me to choose one of the songs to mproduce a musicvideo of. 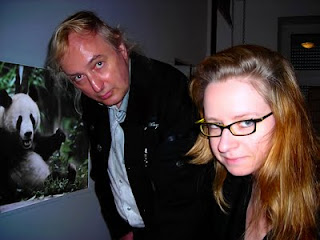 Sophie Tiller showed her photobook of a travel to China to Fu Long, a panda bear born in Vienna and returned to China.
Posted by ViennaCC at 4:33 PM No comments: 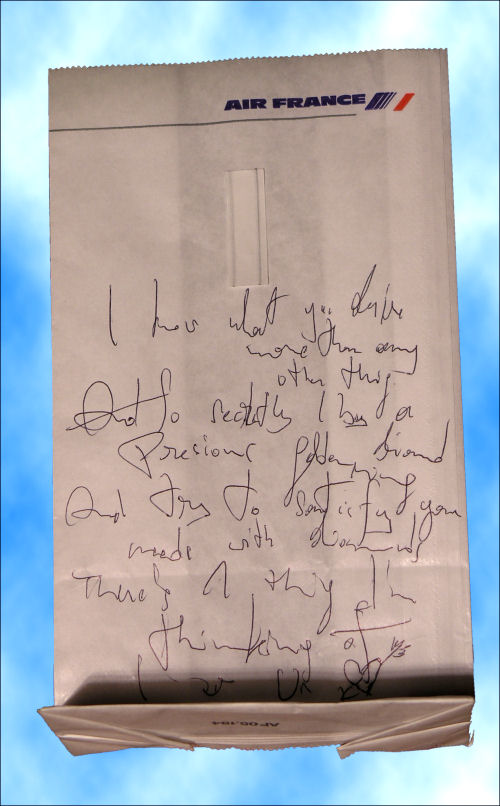 Wrote a songidea on Air France barf bag on flight paris - vienna. needed paper, needed it immediately. What to do? So I took what I could get. I will keep this as a souvenir.
Posted by ViennaCC at 9:13 PM No comments: 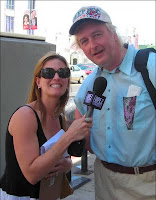 I was going to my hotel, which was only a block away from Kodak Center / Hollywood Bvd. A man asked me if I wanted to be interviewed for Lopez Tonight, the TV-show for a US comedian. They asked me questions about Osama Bin Laden.

Q: Can You say something positive about Bin Laden?
A: I suppose he had clean underwear.
...and more or less funny. Finally they make fun of me. But never mind, I am a Eurobuddy and far away.

I did not find that on lopeztonight.com but they told me it's broadcasted on Wed, May 4, 2011 9pm PT.
Posted by ViennaCC at 9:13 PM No comments:

Photoidea to try out: Motion in a static picture 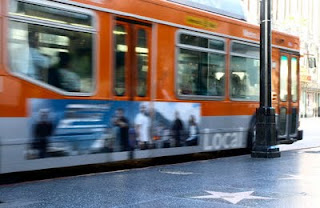 Moving objects show dynamic even in a static photo. We all know night-pictures with long exposure time. The lights of passing cars smear in the photo. But have you ever tried this in a day picture? I did not, because on a sunny day exposure time will short to have all objects sharp. Today I will make experiments with long exposure time on a sunny day in the streets of Hollywood where hopefully all moving objects like tourists, Michael Jacksons, Johnny Depps, other self exposer and automobiles will be blurred. That should give a kick of motion to the static picture.

In my example I made the shot when the bus left the busstop on Hollywood Bvd. The star and the lamppost are sharp, the bus is unsharp.
Posted by ViennaCC at 5:54 PM No comments:

Photos Hollywood, a selection with stories 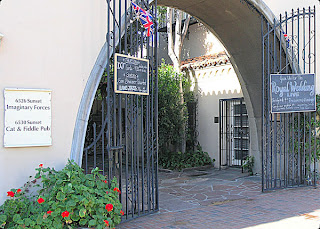 Royal wedding had a big impact on US media. Even a restaurant on Sunset Bvd offering a Wedding event. 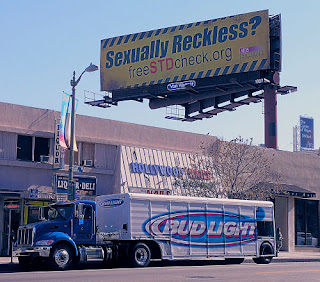 Sunset Bvd: It's a man's world. Sex and beer. I got to take this shot. 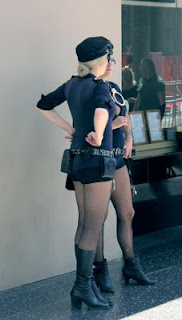 All under the eyes of the guardans of the law. Is that real? No, it's self exposer waiting for tourists. But these police offers are so charming. every man is impressed. 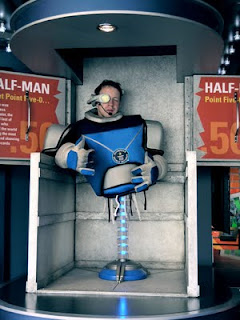 Every man? There is a guy or should I say a robot talking to people passing by. It's half man, half robot at the Guiness World building on Hollywood Bvd. 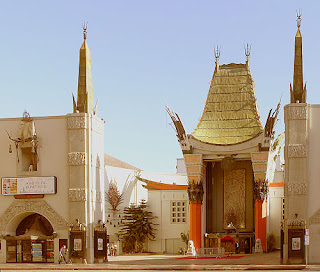 Another insteresting shot. Chinese theatre on Hollywood Bvd. Not remarkable? The photo motif not. But I made a picture without tourist buzzing around in droves. 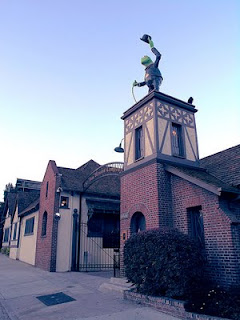 I saw Jim Henson Company on Brea. On top of the entrance there is - it seems so logical - Kermit the frog. I did not enter, there is no museum, there is business obviously. 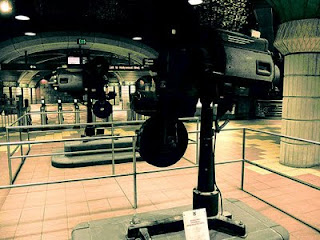 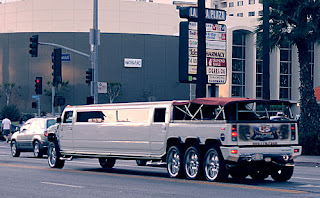 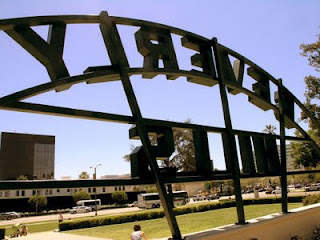 And where do stars go? To Beverly Hills. It is not innovative to picture the sign in a front view. But why not taking an alternative shot from behind and against the sun? 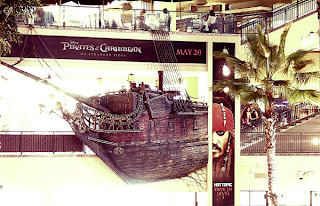 Stars in hollywood... Advert is not enough. It must be a photo event for fans. In Kodak center they made up half a ship with Johnny Depp poster. People can go on board and make pictures. There are so many skulls on the ship.
Posted by ViennaCC at 8:52 PM No comments: