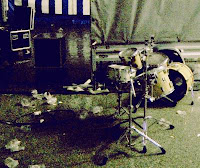 The good news is that home music production is quite prevalent and things aren't as ridiculously difficult as they used to be; analogue recording is the stuff of nightmares. The bad news, however, is that 'correct' music production is still pretty difficult even after shifting to digital recording. As someone who's been in the works for quite a while now, I'd like to give you a very short tour of what's down this rabbit hole.

Before we start, note well: giving you a detailed but succinct summary is literally impossible (no exaggeration). I've done my level best to water this down while keeping it informative and not boring. There will probably be technical jargon you may not understand, but Google exists. It will give you answers to further questions; hopefully without more technical jargon.

First, a small overview of the stages of music production:

1. THE RECORDING STAGE: quite self-explanatory. You will require mics, and an audio interface to connect your mics and any electric instrument to your PC/laptop, although the advent of USB mics has made this easier.

2. THE MIXING STAGE: where you mix separately recorded tracks in your computer software known as a Digital Audio Workstation (DAW), through means of equalisation (adjusting the strength/gain of specific frequencies) and compression (quite literally squashing the recording so that the volume of the loudest parts is brought lower to the softer parts, enabling you to increase overall volume level). You can also add in effects, pan out tracks and adjust volume levels and blah.

3. THE MASTERING STAGE: is not, unfortunately, where you master music production, but where you make multiple songs palatable as an album by further volume adjustment, so that when you go from one track to another, it isn't similar to being in a relatively quiet neighbourhood and then having someone suddenly teleport you into the centre of a mosh pit (take cover). Further equalisation and compression could act as icing at this point.

Now, my first piece of advice: PLEASE don't record a bad composition. Garbled garbage into the mic is not magically fixed; it still comes out as garbled garbage, but digital now. The world doesn't need another 'Hot Problems' – that song had 99 problems and that's it, it had 99 problems. None of which were hot.

Next? Your gear. Firstly, get gear that adheres to your needs. You need to record an acoustic guitar? You only NEED a cardioid mic. You're recording a piano? You only NEED a stereo mic or maybe three cardioid ones. You're going to record drums? Prepare to sell a kidney; that's the only way you can afford that many microphones.

Secondly, get decent gear – not too expensive, nor cheap. That earphone mic WILL give you bad recordings. If your DAW is buggy, opt for another. And if your instruments are falling apart, fix them up. Research a lot and consult pros if possible, so that you don't waste money on paltry things. Get stuff that, for example, doesn't have a hum/high-pitched feedback like my USB microphone. I really should get that changed.

Here's something important: your music production depends a lot on what kind of music you intend to record. Notice how I used the word 'correct' for music production instead of 'good'. If I gave you raw recordings and you mixed them from scratch 20 times, none of the 20 mixes will sound exactly the same; but they're probably all good recordings.

The intended aesthetic for the song matters too. Listen to 'Metalingus' by the metal band Alter Bridge. You'll notice that the vocals in the song stick out nicely; the guitars have this nice and gritty tone; the drums snap through all the other instruments; and finally, the bass, which is not upfront but not inaudible either, sitting snugly in the maelstrom of audio. Then, you've got low fidelity (or lo-fi) music such as Flatsound. Give 'I Exist I Exist I Exist' a listen; you'll immediately notice the universe-sized difference between 'Metalingus' and this one. The vocals sound muddled, the guitars have this weird echo or reverb about them. Now, here's the thing: I can't call it a bad recording. Songs of this style and aesthetic are oftentimes MEANT to sound this way. However, I dare you to try the same thing on a metal song like 'Metalingus'; I'll give you a hundred bucks if you don't come out with a cacophony of jarring sonic turd. Even songs of the same genre could sound different. Keep in mind what you intend to do, and do it right.

Next up: your recording environment. Is there lots of echo in the room? What about background noise? Does your mom keep yelling “Eshob gaan-saan diye kisu hobe na tui porte bosh”?  Fix it. For example, I hang up bedsheets to reduce echo in my music room, and turn off the fan/AC, and record after sundown to reduce background noise as much as possible; heck, in my previous house, I used to record at 3 AM (#dedication). I don't know how to fix the problem regarding your mom though; sorry about that.

Microphone placement is important. For example: using one single cardioid mic on a guitar, you can get various different sounding recordings, even if you play the exact same thing over and over again. If you set the mic close to the sound hole of a guitar, the lower frequencies will be prominent in your recording. The higher you go up the guitar neck, the mid-range and higher frequencies will steadily become more noticeable instead. Take note: I'm only talking about the microphone and the sound source i.e. the guitar, in this case. Considering your recording environment, you'll get even more vastly different sounding recordings; recordings in a hall and your bathroom have huge differences. Oh, and the recording will also sound different in different areas of said environment. And of course, if I mention the different types of microphones, that's diving into an ocean we'll never come out of.

Here's something many newcomers tend to neglect: presenting your mixes to your fellow producers. Yes, send your mixes to your friends, but a lot of them – if not all of them – will say “I hear nothing wrong with it.” In a small impromptu survey I conducted, involving 30 people, regarding knowing the difference between a stereo and a mono recording, only 3 could answer (and someone thought I was talking about mononucleosis). This should tell you that the general populace often doesn't have the ear or knowledge for this (no offense to the general populace).  Find an equal to share your work with and learn to adjust to criticism.

Finally, the last annoying point: practice. Record and mix often, and remix old recordings to see how much you've improved over time. Offer to record musician friends or bands, for free or for money; it's helpful either way because you'll be getting money and experience, or just the experience. Don't get disheartened easily and don't expect to get good really fast. Like almost all good things, it takes time and effort.

I sincerely apologise if this article was a waste of your time, as I had to put one foot in a boat for beginners and another in a different boat for average readers. My intention was to help you appreciate the sheer effort that goes into the music you listen to on a daily basis, or spark the flame for you to go on your own music production journey.

For the genuinely interested, I recommend looking up YouTube channels like 'The Recording Revolution' or 'Produce Like A Pro'. Look up info regarding DAWs (Audacity, FL Studio, Ableton Live, Mixcraft, etc.), microphones (learn about condenser and dynamic and different polar patterns, good brands include Shure, Audio-Technica, Blue, etc.), audio interfaces (brands include Presonous, M-Audio, Focusrite, Roland, etc.) and recording techniques. Try not to get lost in the multitudes of 'OMG luk @ dis begnr's guyd 12/10 works evrytiem' articles which give too much info in one go. If you're interested in where to buy equipment, check out Music World in Bashundhara City, Golden Music Company in Rupayan Golden Age at Gulshan 2, Omni Music at Genetic Plaza on Dhanmondi 27, and Melody & Co. near Elephant Road (and other shops in that area). The price of each item ranges from about BDT 12000 to 18000 (yes, I know, but it's for music). Practice like there's no tomorrow (because technically, tomorrow only exists today). But most importantly: *cliché mode on* never forget to have fun. Happy recording!

Rasheed Khan is a hug monster making good music but terrible puns and jokes where he's probably the only one laughing.
Posted by ViennaCC at 3:09 AM