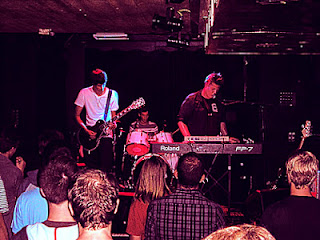 Email ThisBlogThis!Share to TwitterShare to FacebookShare to Pinterest
Labels: propella, the queue

WoW (Words of wisdom the world is waiting for ;-)
Everywhere there are little stories worth to be pictured. I move around with my camera just shooting everydaylife.

When the concert is over, don't worry. Be happy that it happened.

You may learn from the past what to avoid in future.

I wonder if happiness has a colour. If so I would paint the world. I think a genius has to discover this.

Some people shorten words in a way i can't understand. Reading that tweet sounds like popping popcorn in a rapper's mouth.

Why is disappointment a feeling. It should be a gas. Then you simply open the window to let it out.

Rainy day in Vienna - shot 2012-07-13 7:07am in Vienna / Landstrasse near Schlachthausgasse. I shot while walking, a spontanous idea. I held the camery in my hips. I did not correct the horizon. This wry look adds flair to the shot.

It was slightly raining. With photoshop I made up the colours and darkened the photo. Then I added lens flare, you see it on the right. The sky is photoshopped, I wanted dark clouds. In real there was a grey sky, no structured clouds. Finally I darkened the edges to make it look like from a old camera. 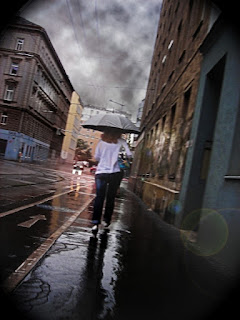 Subway in Vienna - shot 2012-07-16 7:06am in Vienna / U3 Ottakring. Another shot from the hips, a wry look to the coming U3. First I processed the photo with HDR to lighten the dark parts and to add more contrast to the picture. Then I darkened the lighter parts, mainly the sky. Then I added more contrast with photoshop to make it look more dirty. With increasing saturation at the train and the yellow mark on the ground to focus on the incoming train, that's what people are waiting for. 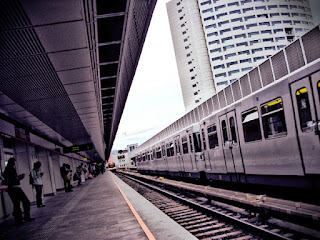