WoW (Words of wisdom the world is waiting for ;-)

Everybody has mistakes you can learn from. Nobody is perfect.

The only constant in life is: change. As the waters flow down the river, as the stars move on the sky, as the wind plays with the leaves,…

Be no twitterer, just tweet when you have time: ANY TIME.

I hate it to write a tweet of my thought and it is 141 characters long. What words 2 clip, what meaning destroy - and not read like rapper?

Ignoring someone who loves you is like overseeing the sun by counting clouds.

Make the most out of this night - and worry about tomorrow. Or better not? I mean not worry - what did you think?

Polishing your guitar is not enough to make you a good guitar player.

Lost and forgotten? Tune in some old songs you heard years ago. This will bring back memories. Good or bad memos - it's up to you (and your dark past, hehe)

The Black Shampoo, a trio from Vienna / Austria, play 21st century rock'n'roll (self definition), a reduced, energetic rock.
The colour black is the band's colour. Dressed in black, homepage is black&white, colour photos have so much black and white, even two videos in black&white. 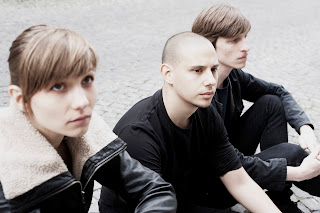 These young people are:

Black Shampoo is going to the desert to turn up the heat. They need no DC, they need no AC, they generate their own energy. Yes, it is burning in your eyes and pulling on your hair – and that is exactly what they want. The brute and hammering sound of this trio is screaming like a swollen finger in a tiny, overly tight golden ring.

Where to find a desert in Austria? Is it a desert of city with smoke, dirt and noise? That's what I suppose when hearing the sound of the band. It got to heard loud, damned loud. Plug in, tune in. I, the listener, need AC.

The band plays a strong sound, strong enough. It's pure. It's dirty. Like crawling up from the rehearsal room deep down in the basement. The band's sound is dominated by lead singer's vocals and his guitar. The singer sings expressive like the Hives, from melodious to screaming.