Before leaving putting bananas in the fridge.

Visited Universal Studios again. I came at opening time, 10am. Because the studio tour was so interesting I did it again. Now I knew when to make my camera ready and where to point it to. Now I have a shot of the DeLorean from "Back to the future". Another great show was the 3D animation "Terminator 3D". Not only because Arnold Schwarzenegger plays - he is also from Austria - but the 3D animations are exciting. Effects appeal to all senses: When monsters explode you get a cold spray of water and seats are shaken.

After 2 hours I left for Downtown L.A. Going with metro to Union Station. Walking downtown. 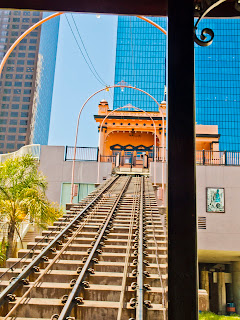 As every year I visit the Westin Bonaventure hotel building at Flower Street / West 4th Street. What a beautiful sight when going with one of the lifts up the 32nd floor. Not to forget the shops inside. Lady said, filming with triangle is not allowed. Big dark lobby with bar in the middle.

Now to the financial district. Interesting museum at Wells Fargo bank. You see an old coach. Business men going from one building to another. Some busy, some relaxed. I think life in LA is more relaxed. People in New York City seem to be more stressed, more under pressure. Here in LA people are obviously not as hectic as in NYC. I did not see so many people in the streets. Maybe it's because the streets are so wide and there is no traffic breakdown, not even in rush hour.

Short visit to Macy's. From 7th Street / Metro Center homewards to Hollywood Highland.
My bananas were frozen and feel like a stone on a iceplanet. The banana skin is partly dark brown. Cool effect, but no impact on the fruit inside.
Posted by ViennaCC at 10:00 PM No comments:

#Guitar:
Guitarists: How To Maximize Productive Use Of Your Energy Resources

#Social #Media:
6 Ways to Integrate Print with Your Social Media Marketing
5 Big Social Media Trends to Watch — and 2 You Can Ignore
Is social media right for your business? 3 questions to ask (musicians will say YES)

#Writing:
4 Rules for Setting Designations off with Commas

WoW (Words of wisdom the world is waiting for ;-)
Waking up the american way: tv, black coffee, tv, shower, donut, tv, cornflakes and tv
Posted by ViennaCC at 10:44 AM No comments: