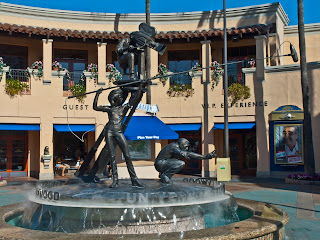 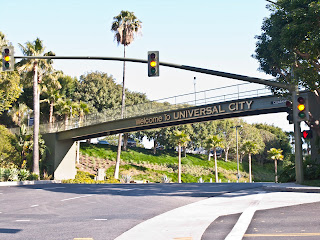 Visiting Universal studios. At the ticket desk the officer acted as a sales representant and had advisory talks. "If you buy this then get benefits..." showing a paper, " do you want ...". People discussing, being unsure. I booked my ticket from Vienna. After standing 25 minutes in the sun he told me that I have to go to the guest desk. New game, new queue, silent Yippieh in my brain. Ok, second day for free is included.
Well on first sight it looks like Vienna, Wurschtelprater. A funzone with games and food. Food is sold everywhere, typical american food: fat and sugar. No thanks, not for me.

Now to first attraction, the Horror house. Great, I was shocked for real. Better then horror houses in vienna. Because they have real men working there as monsters. It is not a mechanical machine with forseeable actions. And if you pass the situation on the sideline the monster will take out his arm wider to grab you. No escape!

Then I want to see Transformers 3D. Announced next show at 11h30. The show is in the lower lot. Passing the Apollo 13 capsule and statues of Tom Hanks and two others and going to endless elevators from Upper Lot to Lower Lot. Although announced the show is cancelled. Workers are going in and out and a guard said that the show will take place in one month.

Now going to see Blues Brothers show. That was fun. They played all hits known from the movie and performed on stage to playback music, but sang live, together with a black lady with good voice and a black singer. Arriving and leaving in the original Blues brothers car with a big speaker on the roof.

Now to the Studio tour. Very impressing. 3D Jurassic park show, white shark coming, Norman Bates from Alfred Hitchock's "Psycho" attacking the car with a knife after putting a dead body into his car. Very impressing the whole cities with buildings and streets. It's all scenery. Also New York buildings where Criminal Minds is produced. Fire and noises and dancing cars moved by big robot arms from the movie "The fast and the furious". I also saw the DeLorean from the movie "Back to future".

3D glasses are needed for a Jurasic park show in 3D. Dinosaurs are attacking the train with visitors and King Kong is not amused. They show parts of the movies when the train passes the scenery. And I felt an earthquake while in the metro. Waggons crashed, flames come out a gasoline tankcar. And water splashed toward us while the train is shattered. When the show is over the train moves to next attraction, robot arms move the metro waggons back to starting position, he fire ceases and water run off. The scenery is ready for the next train coming after 10 minutes. Best seats are 2nd or 3rd waggon (from 4) on the right side. There the white shark and Norman Bates is nearest.

The Special Effects show at 2h30 pm was cancelled due technical problems. Sh..... Even in Hollywood not everything is perfect. Now seeing Animal actors. Amazing what animals can do. It was a very great show with gags.

Now back to the 4pm show of Special Effects. Well, nothing technically new for me, I saw factual films on tv, but impressing and funny too. They showed Bluebox, motion capture and other effects like a knife cutting a hand. With the help of a visitor. That young girl had a awful screaming, she would get a job as screamer for horror movies. Looking behind the scenes is usual in US shows there were gags and fun.
Universal Studios is a must for Hollywood visitors.

Finally I must say, it was impressing. And april is a good time for travelling. I had to wait maximum 15 minutes. No endless queues, no mass of people.

In the evening I wrote postcards to friends saying:
Today there was a earthquake while I was in the metro. Partly ceiling has collapsed. And it was a so warm and sunny day. In waggon there was nobody hurt, only screamings. Then I visited other shows at Universal Studios. Greetings from Hollywood!
Posted by ViennaCC at 10:00 PM No comments: