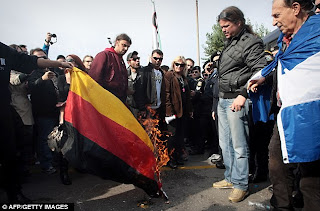 Greek's enemy image is - wonder, oh, wonder - Germany.
Greek strike protesters burn German flag, chant "Nazis Out". I shake my head, no understanding.
Greek politicians caused this plight. Why not brand them?
In a land where democracy was born political parties are vassals of privileged, enriching layers, who suppress the majority of the Greeks. Where are the goals of the political parties?
Example: PASOK, social democrats, founded 1974-09-04 by Andreas G. Papandreou.
The political principles of the Socialist movement had four fundamentals:
The first two were driven by the Greek situation after world war II. and dictatorship (1967 - 1974). But what about No.4 ?
Democracy in Middle-Europe also means monitoring political practice by oppositionists. But what if all political parties are deep in a cesspool of corruption and clientele politics? It was Greek's politicians who stole into Euro-zone with fraudulent numbers. Yes, Greek olive tree peasants had nothing to deal with that big fraud, but now they have to carry the can for that.
But when Europe is trying to rescue Greece (and the Euro) it is not acceptable to us when Greeks burn EU- and Germany-flags. Greece, you elected your politicians, you wanted it, now you have it, now deal with it. And do not act like having a need of dictatorship. Identify your enemy in your own parliament, not outside your boundaries.
Is radicalism and political escalation really the right way to a peaceful Europe?
Posted by ViennaCC at 5:04 PM No comments: