Who has the beer? 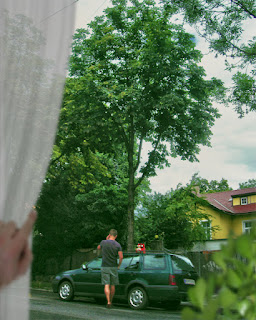 He got the beer, I saw it through my window. Secretly he took it away from the fridge. The whole box. Why? Because alcohol is a drug and should be removed? Who is that man? Suspicious. Let us hope, he will not drink and drive. Is it a present and if for whom is it? Did he took all beer or did he leave a few bottles? The car is big enough to carry more. I did not see his face to face the facts. Is he from town or a stranger passing through?  The bottles are not empty, I can see the bottle tops. So he will not go to a bottle bank.

Whom is he talking to on his mobile? Did he call somebody on his mobile or was he called? Maybe he wants to tell somebody "I got it!". If he is going to a party he probably will stay overnight. I don't think that he will not drink the beer and so he probably will not drive home by car. Are there ladies at the party? If so why does he only have beer and no chocolate or flowers? Only beer, typical for a men's party. Today there is no football match on tv. Is it a stag party?

Why is he driving alone to a stag party? He looks unmarried. Why did he not marry? Too much drinking beer? For an unmarried man he drives a very big car. Maybe he is a craftsman or delivery man. But there is no company logo on the car. The car must be his private car. If you are a do-it-yourselfer you need such a big car. Or is he a sportsman? There are no signs of transporting tools and materials on the car. I think he is a sportsman. But why is a sportsman going to a beer drinker's party?

There is something strange going on in the neighbourhood...

Whereever you look there are hundred stories behind
Posted by ViennaCC at 1:58 PM