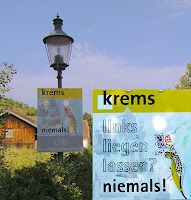 Walking in the beautiful valley Wachau from Duernstein to Krems I saw a sign. From far I read "Krems niemals!" meaning "Krems never!". Coming closer I could read the words between saying "Krems links liegenlassen? Niemals!" meaning "Give Krems a go-by? Never!". It seems that either the sun has bleached out the words in the middle or some funny people, let's call them anonymous, removed letters. Nevertheless a very unclever advert because you should avoid a negation in a message. 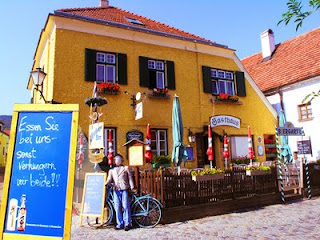 In Unterloiben, a small village between Duernstein and Krems there was a restaurant with a funny sign saying "Essen Sie bei uns sonst verhungern wir beide!" what means "Eat here otherwise we both starve". Very creative!
Posted by ViennaCC at 4:01 PM No comments: