Saturday, July 23, 2011 at festival Kunstmue I saw great bands playing. It was a rainy day, but never mind. The music was in a big tent. I interviewed organizers Flo and Gasti. This year it was a free event, no entrance fee! 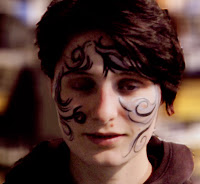 I also took a few shots backstage when musicians spontanously made a a capella sing session. Some evergreens will never die: Steirischer Brauch, Kleine Nachtmusik (Serenade No. 13 - Mozart), Satisfaction, and ... and ... and. Some painted their face. Hey, that was funny!


My tip
All in all it was worth to travel from Vienna to Bad Goisern to hear fine rockmusic. I am looking forward next year, because this event is growing. This year the tent was bigger than last year. A must event for Austro music fans.

Interview crasher
Know partycrasher or wedding crasher? When TV producer Ulla Bartel interviewed the organizer of the festival the band Hindoslem crashed into the interview with loud "uhuhuhuhuhuh". Spontanous actionism.

Gnackwatschn
The group's name is a slang word meaning something like "neck slap". They combine Austrian folklore music with ska and rock. They won 1st price at local hero contest and with it a staging slot at Kunstmue festival. Funny rock, must sound very exotic for tourists.

Blood Mile
Unfortunately I did not see this local death metal band. Bassguitar player Mike asked me for interview. I did what must be done ;-)

Pauls
Interview with singer/guitarist Paul from Vienna. That's indie rock, the music I like. The more he said that Rolling Stones are a big influence. I really enjoyed the gig at the festival.

play melodic guitar solos based on a merciless drums and bass fundamental, a remarkable sound. I think this band is on the way up to Austro rock heaven. Where Angels are they play like the devil. Made an interview with them asking about the bandname. They have nothing to do with Hinduism or Islam.
The singer told me that young audience often don't know the old masters like Rolling Stones or Alice Cooper. Not this time. When they played a cover of "Schools out", an Alice Cooper hit from the 70s, the crowd sang along with the band.
Later then backstage the bassplayer asked me for a interview and adulates me ("the famous ViennaCC"). I said what must be said: Hindoslem are on the way up and play great rock - as I wrote above. This simply is my opinion, so go and listen to their music. 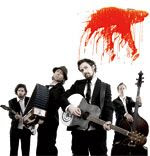 The show is over...
and there was so much work to do for technicians, musicians and organizers.